How to Beat Egg Whites

Beating egg whites is a critical step in recipes for meringues, cakes, soufflés, entremets and many other pastries.  It's not hard to get it right, especially if you know a few tips.

First of all  it is best to begin at a slow speed and gradually move up to high when beating egg whites until they become foamy and frothy (Picture 1).

At this stage begin to add your sugar (Picture 2). Sugar must be added gradually to prevent collapsing the foam, so begin with a small amount once the egg whites are foamy, and continue to add it gradually as you beat.

When the beaters or whisk is lifted out of the egg whites, the peak will stand erect and not bend over. When firm peaks form (Picture 3), the egg white have reached their fullest volume and should not be beaten any longer. If you overbeat them, they will liquify again. 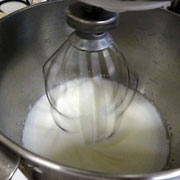 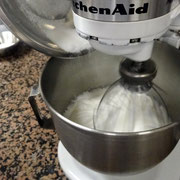 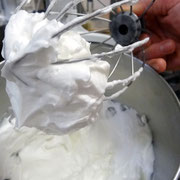 1 In accordance with Kleinunternehmerstatus exception of §19 of the German Value Added Tax Law, we do not collect or display VAT.
About | Payment and Delivery Information | Privacy Policy | Sitemap
Log in Log out | Edit
Close